What you need to know about adulterated alcohol in Costa Rica

The World Health Organization has reported poisoning incidents in more than a half dozen countries worldwide. In Costa Rica, the government has confirmed methanol-related 20 deaths since WHO issued its alert. The Costa Rican government has moved aggressively to find and seize methanol-tainted alcohol since early June in the face of widespread methanol poisoning around the world.

The Health Ministry of Costa Rica issued a sanitary alert July 10, saying several brands may contain methanol. Guaro Montano and Guaro Apache, as well as 5 aguardiente (schnapps) brands: Estrella Roja, Molotov, Sachetto, Barón Rojo, and Timbuka. In addition to the warning against buying or drinking these brands, the government is asking people to report seeing any of these brands for sale at denuncias.drpis@misalud.go.cr while the sanitary alert is in effect.

What you should know

What the suspected brands of tainted alcohol look like

Be on the lookout for the brands that have been seized and are suspect. Always go for premium, or well known, brand liquors. 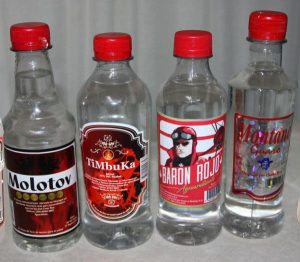 So, is it safe for me to drink alcohol in Costa Rica?

The short answer is yes but let us explain. Reputable restaurants, liquor retailers, grocery stores, and bars depend on consumer confidence in their services. They certainly take seriously the government’s warning and the resultant enforcement efforts because they depend on your patronage. Costa Rican officials are acting proactively to safeguard the supply chain.

That said, there are precautions you can take:

As with any product, be wary of claims made about any brand name you don’t know. Don’t hesitate to ask your server or retailer about what you’re buying. Reputable sellers have a vested interest in ensuring your satisfaction and good health. The hoteliers of Distinctive Hotels have spent time and money on the reputation of their hotels. They want you to have confidence in their properties and feel safe during your stay in Costa Rica. If you have concerns about your upcoming visit, don’t hesitate to reach out today.